Flexible LED strip is made ​​of FPC circuit board assembled with SMD LED. The thickness of the strip light is only that of a coin, which make it save more space. The most common specifications include, 30cm with 18 LEDs or 24 pcs of LEDs, and 50cm with 15 LEDs, or 24 LEDs, or 30 LEDs and so on. Of course there are also strips in 60cm, or 80cm. Stip lights of different specifications are used for many different applications. People can cut or prolong flex LED strip for its own use; however, the luminescence would not be affected. The LED strips with  FPC(soft material), can be bent, folded , winded, or stretched in three-dimensional space without breaking. Flexible led strip is suitable for irregular use or cramped places. It's also very popular in advertisement decoration for its soft and flexible feature. 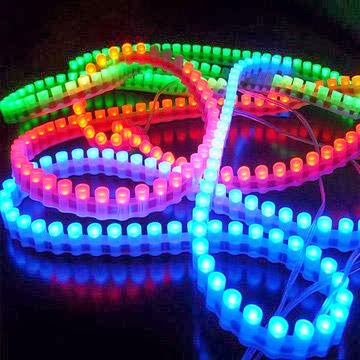 LED light bar is made of a hard PCB board assembled with SMD LED or line LED. Different components are assembled due to different lighting needs. The advantages of LED light bar, or rigid LED strip, are easy-fixation, easy-processing and easy-installation. But LED light bar can not be bent like flex strips. It's not suitable for irregular areas. The most common used LED rigid strips with SMD LED include 18 LED, 24 LED, 30 LED, 36 LED, 40 LED,etc. Light bars with line LED include 18 LED, 24 LED, 36 LED, 48 LED, etc.